Interfacing LED matrix displays with the MAX7219 driver [PDF datasheet] in Python (both 2.7 and 3.x are supported) using hardware SPI on the Raspberry Pi. A LED matrix can be acquired for a few pounds from outlets like Banggood. Likewise 7-segment displays are available from Ali-Express or Ebay.

For the 7-segment device, initialize the sevensegment class:

The MAX7219 chipset supports a serial 16-bit register/data buffer which is clocked in on pin DIN every time the clock edge falls, and clocked out on DOUT 16.5 clock cycles later. This allows multiple devices to be chained together.

When initializing cascaded devices, it is necessary to specify a cascaded=... parameter, and generally methods which target specific devices will expect a deviceId=... parameter, counting from zero.

By default, the SPI kernel driver is NOT enabled on the Raspberry Pi Raspian image. You can confirm whether it is enabled using the shell commands below:

Depending on the kernel version, this may report spi_bcm2807 rather than spi_bcm2835 - either should be adequate.

And that the devices are successfully installed in /dev:

If you have no /dev/spi files and nothing is showing using lsmod then this implies the kernel SPI driver is not loaded. Enable the SPI as follows (steps taken from https://learn.sparkfun.com/tutorials/raspberry-pi-spi-and-i2c-tutorial#spi-on-pi): 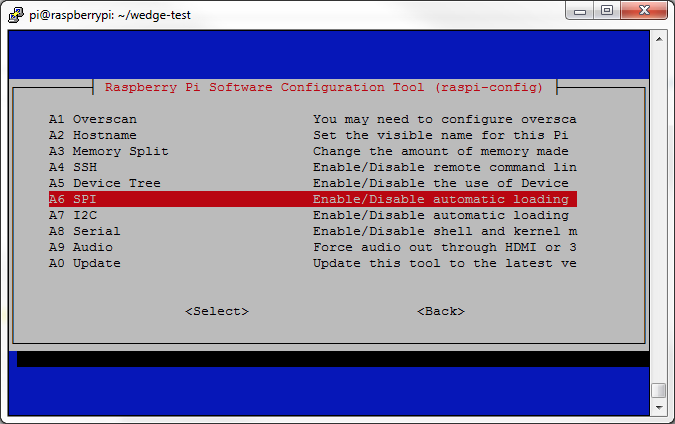 After rebooting re-check that the lsmod | grep -i spi command shows whether SPI driver is loaded before proceeding. If you are stil experiencing problems, refer to the official Raspberry Pi SPI troubleshooting guide for further details, or ask a new question - but please remember to add as much detail as possible.

The breakout board has two headers to allow daisy-chaining:

Note: The library has been tested against Python 2.7 and 3.4. For Python3 installation, substitute pip ⇒ pip3, python ⇒ python3, python-dev ⇒ python3-dev, and python-pip ⇒ python3-pip in the instructions below.

Install the latest version of the library directly from PyPI:

Alternatively, clone the code from github:

Next, follow the specific steps below for your OS.

The MAX7219 chip supports cascading devices by connecting the DIN of one chip to the DOUT of another chip. For a long time I was puzzled as to why this didnt seem to work properly for me, despite spending a lot of time investigating and always assuming it was a bug in code.

Despite the above two points, I still had no success getting cascaded matrices to work properly. Revisiting the wiring, I had connected the devices in serial connecting the out pins of one device to the in pins of another. This just produced garbled images.

Connecting the CLK lines on the input side all together worked first time. I can only assume that there is some noise on the clock line, or a dry solder joint somewhere.

If you have more than one device and they are daisy-chained together, you can initialize the library with:

To address a specific device, most other methods expect a deviceId=N parameter (where N=0..cascaded-1).

Run the example code as follows:

Note: By default, SPI is only accessible by root (hence using sudo above). Follow these instructions to create an spi group, and adding your user to that group, so you don’t have to run as root.

Pull requests (code changes / documentation / typos / feature requests / setup) are gladly accepted. If you are intending some large-scale changes, please get in touch first to make sure we’re on the same page: try and include a docstring for any new methods, and try and keep method bodies small, readable and PEP8-compliant.

Permission is hereby granted, free of charge, to any person obtaining a copy of this software and associated documentation files (the “Software”), to deal in the Software without restriction, including without limitation the rights to use, copy, modify, merge, publish, distribute, sublicense, and/or sell copies of the Software, and to permit persons to whom the Software is furnished to do so, subject to the following conditions:

The above copyright notice and this permission notice shall be included in all copies or substantial portions of the Software.

THE SOFTWARE IS PROVIDED “AS IS”, WITHOUT WARRANTY OF ANY KIND, EXPRESS OR IMPLIED, INCLUDING BUT NOT LIMITED TO THE WARRANTIES OF MERCHANTABILITY, FITNESS FOR A PARTICULAR PURPOSE AND NONINFRINGEMENT. IN NO EVENT SHALL THE AUTHORS OR COPYRIGHT HOLDERS BE LIABLE FOR ANY CLAIM, DAMAGES OR OTHER LIABILITY, WHETHER IN AN ACTION OF CONTRACT, TORT OR OTHERWISE, ARISING FROM, OUT OF OR IN CONNECTION WITH THE SOFTWARE OR THE USE OR OTHER DEALINGS IN THE SOFTWARE.